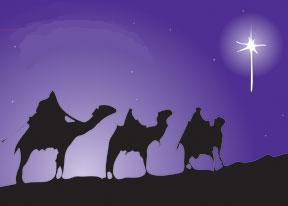 Wise Men from the East

If we will look at the writings of historians, according to Herodotus (i. 101), which lists the names of the six tribes or castes of the Medes, the Magi were a hereditary caste of priests. They were highly influential in Median society until the unification of the Median and Persian Empires in 550 BC. Others say that the word Magi is an occupational title referring to the priestly caste of Zurvanism. As part of their religion, these priests paid particular attention to the stars, and gained an international reputation for astrology, which at that point was a highly regarded science, only later giving rise to aspects of mathematics and astronomy. Some say that they have come from ancient Iraq.

However, Matthew did not really mention their names or identity (if they were monarchs); neither their actual number nor the exact place where they came from except that they were Magi from the east and they were more than three.

Regardless of their true stature and identity, it is safe to conclude that these people have received divine revelation from God. They have not been searching for something that they do not know or for something that they just want to discover. They are not just curious about what the bright star means or where it leads. They have come with a sure and clear purpose, to search for the King of the Jews and worship Him. In fact, they are so sure that have brought precious gifts for Him. As to how they have received the revelation, is totally unknown except that they followed the brilliant star that they have seen from the east.

Perhaps, their identity is not much of an importance. The essence of their mention in the gospel lies in what they have done. They have worshiped the King of the Jews even though they are from a distant land. This only showed that Christ has come not only for the Jews but for Gentiles as well. Whatever sort of wise men they are, what is clear is that they have acknowledged Jesus as their King. Indeed, Jesus is the King of all nations, tribes, and tongues.