“Then Jesus answered and said to her, “O woman, great [is] your faith! Let it be to you as you desire.” And her daughter was healed from that very hour”. –Matthew 15:28 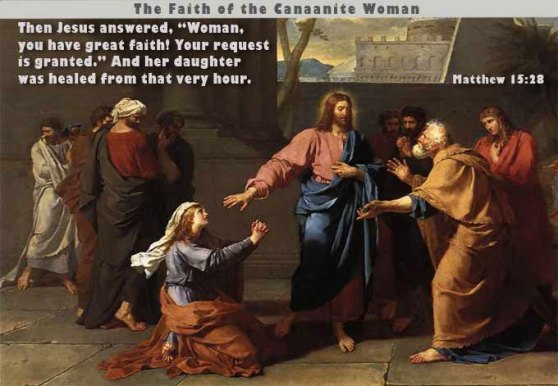 It must have been very difficult for a mother to see her child suffering from a certain illness. She would do everything possible within her means to find a cure. It could be very unbearable if she could not find anything to relieve her child of the pain.

Now, at first we see that the Lord Jesus is not responding to her screams. It must have been very discouraging on her part because she needs help very badly and immediately. The disciples have even called the Lord’s attention but the Lord has said that He has come only for the Jews.  However, the woman has been persistent. The Lord then has answered that it is not good to give the food intended for the children away to the dogs. Yet the woman has not doubted that the Lord Jesus will give what she is asking. She says, “Yes, Lord, yet even the little dogs eat the crumbs which fall from their masters’ table.” The Lord has been impressed with how she has acted in faith. The Lord has commended her faith and has healed her child that very minute.

Many times, people get discouraged easily when the Lord seems to take time in answering their prayer that they stop praying. Here, the faith of the Canaanite woman is a demonstration of absolute trust and confidence that comes from genuine worship.

There are two things that the Canaanite woman has displayed:

How is our faith? Do we have the same persistence and confidence like that of the Canaanite woman? As Christians, may we be able to show a true and genuine faith.

Image above courtesy of: http://www.warrencampdesign.com/